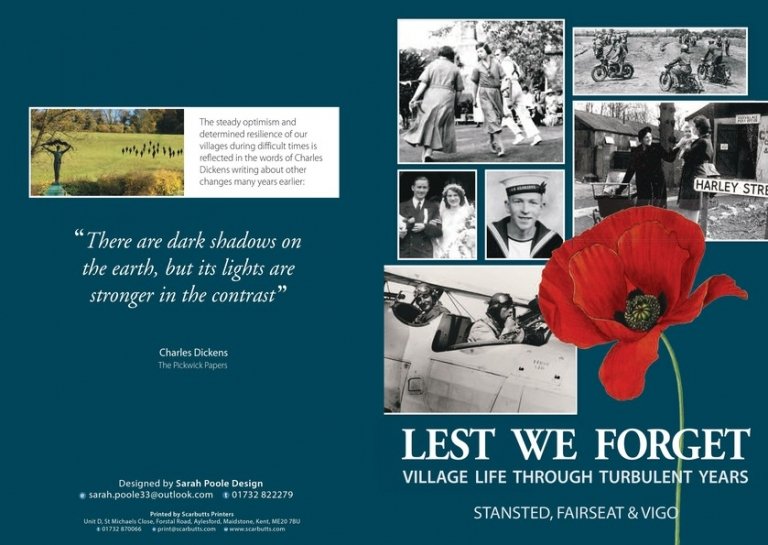 Memorial Booklet
In November 2018 an exhibition was held at the Cloisters, St Mary’s Church, Stansted, to commemorate the centenary of the 1918 Armistice.  The exhibition was very well received with more than six hundred visitors.
From the many comments received it was clear that residents of the villages would welcome a durable record of some of the display materials, suitably updated over the intervening months. A full colour, fifty-six page booklet has been designed and printed setting out the impact of the two World Wars on Stansted and Fairseat and the beginnings of the village of Vigo.  The booklet also contains biographies of those connected with the villages who lost their lives in both conflicts.

If you would like to send a copy direct to a relative, friend or other interested people we shall be glad to arrange that on your behalf.

The booklet is available to purchase at a cost of £4 plus postage & packaging. (UK £1.50, N America and Canada £5.00, Eurozone £4.00, Australia/New Zealand £5.50).  Please contact the Society with your enquiry by selecting the ‘Enquiries’ button, or by email to:
info@stanstedhistory.org

The following publications are available to view and download.

Recollections of the Messerschmitt that crashed in Stansted in 1940 – ‘The One Behind the Church’, by Mark Charnley.
Messerschmitt Crash

The History of the pre-Officer Cadet Training Unit from 1942 to 1946 by Paul Baylis.
OCTU History

A report on the Stansted War Memorial with notes by David Hughes of the Kent War Memorials Transcription Project.
KTP Memorial Report

A report of what was known of the names carved in stone on Stansted’s iconic War Memorial.  This report was produced in the year 2000 by Zena Bamping B.A. on behalf of the British Legion.
War Memorial

A report containing information on local casualties whose names are not recorded on the Stansted War Memorial  The report was produced by the Kent War Memorial Transcription Project (KTP).
KTP Casualties Report

A Historic Building Report for St Mary’s Church, Stansted, prepared by Dr Michael Shapland of Archaeology South-East in 2014 and updated in 2014.  The report was commissioned by the Stansted & Fairseat with Vigo PCC.
St Mary’s – ASE Report

A special edition of the Stansted Parish Notes in the form of a booklet describing the St Mary’s Church bell restoration project undertaken in 1991.  The project was to install a new bell frame, a ringing gallery and cast three new bells to create a ring of six.
St Mary’s Bell Restoration