Stansted is fortunate to have four almshouses. An almshouse (also known as a bede-house), is charitable housing provided to people in a particular community. They are often targeted at the less well off of a locality, and at those from certain forms of previous employment, or their widows, and at elderly people who can no longer pay rent. Almshouses are generally maintained by a charity or the trustees of a bequest. They were originally formed as extensions of the church system and later adopted by local officials and authorities. The concept of Almshouses first came about in Medieval England and subsequently spread overseas. To this day Kent has the highest density of Almshouses in England.

In 1912, shortly after Lloyd George had introduced the old-age pension, the first Almshouses were built in Stansted on an area of land that was previously called Poors Croft, shown as such in the 1841 Tithe rent survey. Maude Berry, whose family had lived in the parish since the 1870s, realised the need for workers and their widows to have somewhere safe to live after their retirement. In 1912 she and her brother built a pair of semi-detached cottages in Tumblefield Road, 100 yards or so from the Black Horse public house. These were built as a memorial to her mother, Ada, who had lived in Soranks Manor in Fairseat. The builder was Joe Hills who lived at Holly Place in Stansted and the architect was a Mr McDermott. The cost to build the cottages was £277 but with the additional cost of the land, the overall outlay was £500. This cost was met fully by the Berry family who also invested a further £100 for ongoing maintenance.

The first pair of Almshouses were dedicated by the Rector, Arthur Cronk, on 1st February 1913 and shortly after one of the cottages was let to George Boyle and his wife and the other to Thomas Marshall with the rent being fixed at one shilling per week (£28 equivalent in 2019).

The second pair of cottages were built in 1926, again the cost being met by the Berry family. Although the same drawings were used, the overall cost of the build had now risen to £550.

A trust was set up to administer the cottages and was initially run by Maude Berry, James Berry, the Rector Arthur Cronk, and the Postmaster Edwin Turbille of Fairseat. 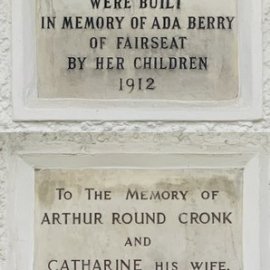 Two plaques on the buildings commemorate Ada Berry and Rev Arthur Round Cronk.

In 1940 residents had to be evacuated to family and friends for six days when a spent anti-aircraft shell landed in the back garden of No.1, and in 1944, some damage was sustained from the blast of a V1 flying bomb, but fortunately with no casualties incurred.
In 1968 some £6,000 was spent in upgrading the cottages which included the addition of bathrooms, water heaters and cookers. This was partly financed by selling surplus land together with grants and loans from the District Council. The first telephone was installed in 1973 and a small car park to serve the cottages was built in 1988.

In 1994 a scheme of extension and refurbishment was undertaken at the four almshouses at a cost of just over £100,000. The contractor was Depwain Construction Ltd and the contract manager was Calford Seaden Partnership. The secretary for the trustees of the almshouses was John Stacpoole of Fairseat Lodge.

When built, each almshouse comprised four rooms; a reasonably sized bedroom and sitting room and a small bathroom and kitchen at the rear and to the side. Each of the almshouses was L-shaped and the 1994 works squared off the L to make the footprint rectangular. The work also created a new entrance, moved the bathroom and enlarged it, and formed a new kitchen at the front. The roofs were also altered so that one continuous roof covered the whole construction.The cottages have been fully occupied since their construction with most residents either having been born locally or having close connections to the Parish.

The Almshouses are a lasting legacy laid down by the Berry family.