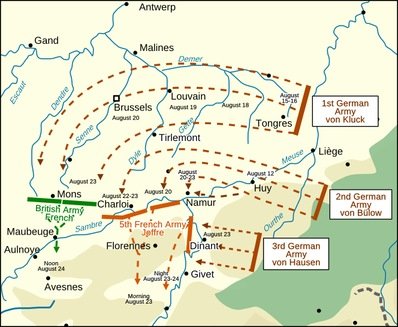 The Germans followed the Schlieffen plan which involved defending the Russian Front with a light force and concentrating on the encirclement of the French with a swift strike through neutral Belgium, thus avoiding the defences along the Franco-German border. The German advance was slowed down by fierce resistance by the French army and the British Expeditionary Force (BEF).

Aug/Sep 1914
The Battle of Mons and the Great Retreat 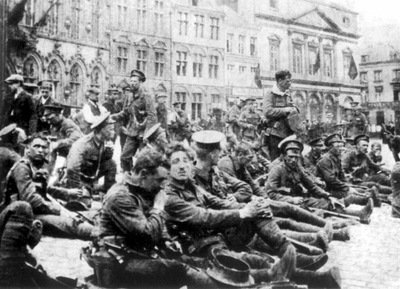 This was the first major action of the BEF. The British Army attempted to hold the line of the Mons–Condé Canal against the advancing German 1st Army. Although the British fought well and inflicted disproportionate casualties on the numerically superior Germans, they were eventually forced to retreat due both to the greater strength of the Germans and the sudden retreat of the French Fifth Army.
13 Oct 1914 - James Pitt died at Pont-Fixé, Lilleon
21 Oct 1914 - Lionel Brown died at Zonnebeke, Ypres

Sep 1914
The First Battle of the Marne 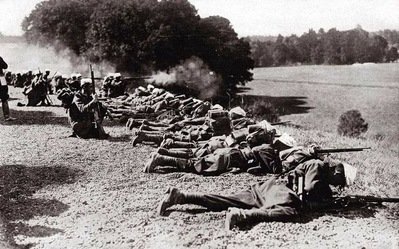 The British retreat from Mons lasted for two weeks and took the BEF to the outskirts of Paris before it counter-attacked in concert with the French, at the Battle of the Marne. By the end of August 1914, the whole Allied army on the Western Front had been forced into a general retreat back towards Paris. Meanwhile, the two main German armies continued through France. It seemed that Paris would be taken as both the French and the British fell back towards the Marne River. The war became a stalemate when the Allied Powers won the Battle of the Marne. It was the first major clash on the Western Front and one of the most important events in the war. The German retreat left the Schlieffen Plan in ruins and Germany had no hope of a quick victory in France. Its army was left to fight a long war on two fronts.

Oct/Nov 1914
The First Battle of Ypres 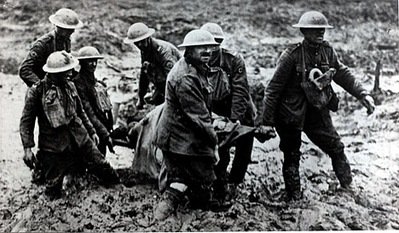 Neither side had moved forces to Flanders fast enough to obtain a decisive victory and both were exhausted, short of ammunition and suffering from collapses in morale with some infantry units refusing orders. The battle was part of the First Battle of Flanders, in which German, French, Belgian armies and the British Expeditionary Force (BEF) fought from Arras in France to Nieuport on the Belgian coast. North of Ypres, the fighting continued in the Battle of the Yser (16–31 October), between the German 4th Army, the Belgian army and French marines. 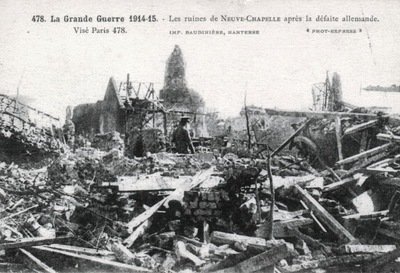 The Battle of Neuve Chapelle took place in the Artois region of France. The attack was intended to cause a rupture in the German lines, which would then be exploited with a rush to the Aubers Ridge and possibly Lille. A French assault at Vimy Ridge on the Artois plateau was also planned to threaten the road, rail and canal junctions at La Bassée from the south, as the British attacked from the north. The British attackers broke through German defences in a salient at the village Neuve-Chapelle but the success could not be exploited.

Apr 1915
The Second Battle of Ypres 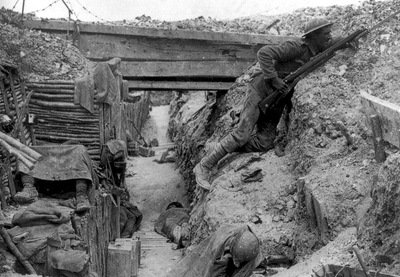 By the end of the battle, the Allied-controlled Ypres salient was reduced with Ypres closer to the front line. The city, bombarded by artillery fire, was demolished. Although poison gas had been used on the Eastern Front, it surprised the Allies and about 7,000 gas casualties were transported in field ambulances and treated in casualty clearing stations. In May and June, 350 British deaths were recorded from gas poisoning. Both sides developed gas weapons and counter-measures, which changed the nature of gas warfare; the French and British used gas at the Battle of Loos in late September after several winter months of static warfare. The Germans recaptured about 1.2 miles of ground.
30 July 1915 - James Johnson died in the Ypres Salient 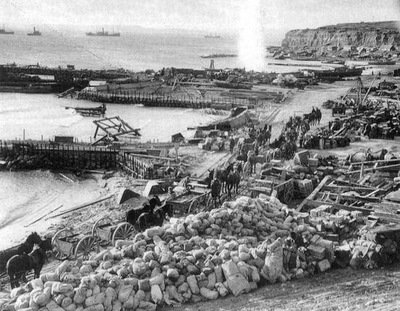 Britain and France launched a naval attack followed by an amphibious landing on the peninsula, with the aim of capturing the Ottoman capital of Constantinople (modern Istanbul). The naval attack was repelled and after eight months' fighting, with many casualties on both sides, the land campaign was abandoned and the invasion force was withdrawn to Egypt.
18 Jul 1916 - James Kirton died in Cairo, Egypt 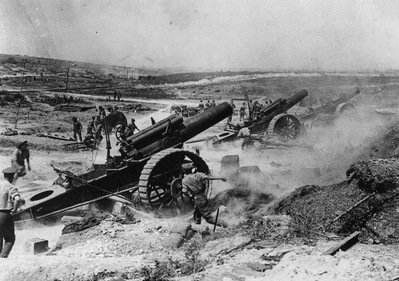 The battle was intended to hasten a victory for the Allies and was the largest battle of the First World War on the Western Front. More than three million men fought in the battle and more than one million men on both sides were wounded or killed, making it one of the bloodiest battles in human history. The battle is notable for the importance of airpower and the first use of the tank. Conscription in the UK had resulted in the formation of many ‘Pals’ regiments many of which, tragically, were wiped out. At the end of the battle, British and French forces had penetrated six miles into German-occupied territory, taking more ground than in any of their offensives since the Battle of the Marne in 1914.
01 Jul 1916 - Ben Streatfield died at the Somme
22 Jul 1916 - John Burnett died at the Somme
21 Jul 1916 - Victor Brown died in Strood, Kent
20 Aug 1916 - William Pitt died in Choques, Calais
14 Sep 1916 - Henry Blackman died at the Somme
07 Oct 1916 - Arthur Soloman died at the Somme
22 Jan 1917 - Alfred Betts died in London

Jun/Nov 1917
Messines and Passchendaele (The Third Battle of Ypres) 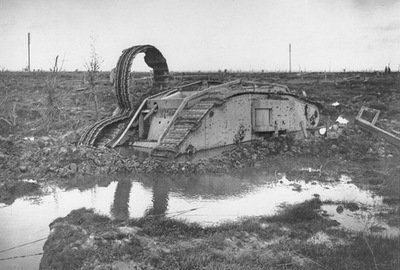 In the battle of Messines the British attacked the Germans in order to relieve pressure on the French army and to straighten the Ypres Salient. The battle was a success for the Allies and was the prelude to the much larger conflict which saw the Allies advance from Ypres to Passchendaele, but at a huge human cost. The resistance of the German 4th Army, unusually wet weather, the onset of winter and the diversion of British and French resources to Italy, following the Austro-German victory at the Battle of Caporetto, enabled the Germans to avoid a general withdrawal, which had seemed inevitable in early October. The campaign ended in November when the Canadian Corps captured Passchendaele.
01 Mar 1917 - Arnold Kemball died at Vimy Ridge, Ypres
29 Nov 1917 - Frederick Bowyer died in Samarra, Iraq 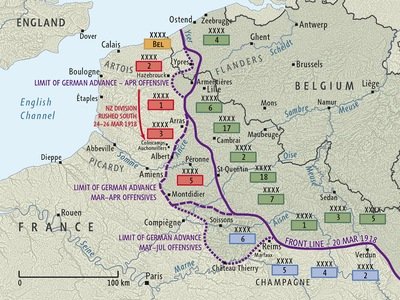 The Spring Offensives of 1918 were Germany’s last attempt to defeat the British and French armies on the Western Front and thereby win total victory. Although they reached within 50 miles of Paris they were severely overstretched. Their failure by the mid-summer left the German army fatally weakened, demoralized and facing its own imminent and inevitable defeat through an Allied counteroffensive.
22 May 1918 - John Martin died at the Somme. 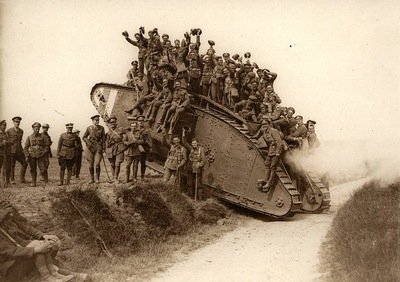 The Hundred Days was the final campaign on the Western Front during the Great War. Increasingly reinforced by American troops and supplies, a series of sequential Allied offensives finally broke through German resistance. The hard fighting that erupted across the Western Front in late September 1918 stretched German reserves to breaking point and threatened to bring about the complete disintegration of the front. The German army was compelled to seek an armistice. In Italy, the Austro-Hungarian army was close to defeat and the Armistice was signed on 3rd November (ie a week before the Armistice on the Western Front).
28 Oct 1918 - Gilbert Goodman died in Godega, Italy.