The History of Vigo Village 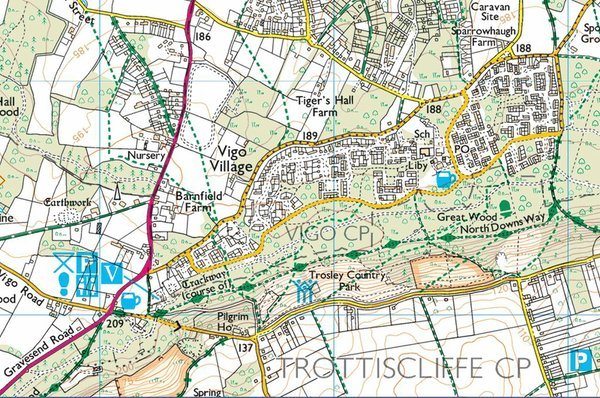 Vigo Village is a civil parish in the Borough of Gravesham, in Kent, England.  The civil parish was created in 2000.  The village is situated in the middle of chestnut woodland at the top of the North Downs, east of the road between Gravesend and Wrotham.  Adjacent to the village is Trosley Country Park which forms part of the North Downs Area of Outstanding Natural Beauty.   In the 2001 census, Vigo civil parish had a population of 2,201, reducing to 2,065 in the 2011 Census.

The Village of Vigo may not be as modern as some would think. Although the existing village originates with the first planning consent in 1962, a hamlet of ‘Vigoe’ is recorded on an early 18th-century map and it may well be that this hamlet took its name from the Vigo Inn. The inn, dating from 1471, is reputed to have been renamed by a local man after he purchased it with ‘prize money’ from his time under Admiral Rooke at the battle of Vigo Bay during the Franco/Spanish War in 1702.

Note: Information on the Vigo Inn is available under ‘Landmarks & Places of Interest’ within the ‘Places’ section of the website.

Little is recorded about the area until the 1870s when Sir Sidney Waterlow purchased large areas of land including the Village of Fairseat, a good proportion of Stanstead, together with plots of land from Wrotham to Meopham. The parts of the estate were linked by a small bridge over Trottiscliffe Road, bearing the Waterlow family crest, and is still in evidence today.

Note: Information on Sir Sydney Waterlow is available under the ‘Luminaries’ section within the ‘People’ section of the website.

In 1887 Sir Sidney Waterlow built Trosley Towers on the crest of the escarpment to the east of Trottiscliffe Road. It was approached by two drives and was surrounded by wooded grounds. Other private drives were constructed, one of which is Hamilton Drive which still survives in Trosley Country Park and runs from the site of the Old House to Commority Road.

Sir Sidney died in 1906 and the estate passed to his son Sir Philip. When he died in 1931 the estate was sold. Some of the houses were bought by tenants, one of these was Pilgrims House, with six acres of land at the bottom of Trottiscliffe Road, which was sold for £600. Trosley Towers and the woodlands were sold to Mr E. E. Shahmoon in 1935.

Note: Information on Trosley Towers is available under the ‘Landmarks & Places of Interest’ within the ‘Places’ section of the website.

In 1936 Mr Shahmoon had Trosley Towers demolished and built Hamilton Lodge along with adjoining stables. One story suggests that the Lodge and stables were built to accommodate the Shah of Persia and his racehorses on his visits to England. The whole area was still owned by Mr Shahmoon when it was taken over by the army 1942 and Hamilton Lodge was to become the HQ of the Army Brigade that was stationed there.

1942 – 1946
Perhaps the majority of those who live in or near the village of Vigo, and who have moved here since the war, were only vaguely aware that this area of the North Downs had been the scene of intense military activity during the last war. Some will have found tangible proof when digging in their garden and revealed tarmac roads or the foundations of buildings only just below the topsoil. Children have often returned with ‘relics’ found in the woods, and on more than one occasion in the past, army bomb disposal teams have been called in to deal with the more ‘exciting’ finds.

With the outbreak of war and the subsequent increase in the size of the army, the need for large numbers of suitable candidates to train as officers soon became apparent. This training was normally undertaken at an Officer Cadet Training Unit (OCTU) which was attached to that arm of the service in which the cadet would eventually serve e.g. RA, RE, Infantry etc.

In the early part of 1942, it was decided to standardise this basic training and send all potential officer cadets to a pre-OCTU camp for up to eight weeks prior to their attendance at their ‘specialist’ OCTU. With a few exceptions, all officer cadets would now be required to attend this newly formed pre-OCTU (Wrotham Camp) which was to be situated on what is now the site of Vigo Village. Training areas would extend northwards through all of ‘Happy Valley’, almost to Meopham, and south to farmland beyond the Pilgrims Way. It would handle the vast majority of officers for the British Army for the next four years. It would be large – up to 10,000 men at any one time.

Note: Information on the Pre-OCTU Camp is available under the ‘Landmarks & Places of Interest’ page within the ‘Places’ section of the website.

For recreation the local pubs and village halls were often visited, the Vigo Inn provided good beer and darts and skittles with the locals.  The Cricketers was also popular and a collection of cadet’s regimental badges once adorned the walls.  Dances were also held at Meopham Village Hall on Wednesday evenings and many ex-cadets wondered if the famous ‘Meopham Blonde’ or ‘Capbadge Kate’ were still around, both apparently the talk of officers messes the world over!

The camp continued to operate through to the early part of 1946, but with the end of the war in sight and the future size of the post-war army already under discussion, the days of the Training Brigade were numbered and the decision to abolish the camp was taken on the 8th April 1946.

Today little is left of what was at one time the largest pre-OCTU in the world. Only the outlines of some of the foundations in the surrounding woods, a concrete platform at the top of the escarpment, which was a map reading point, and a crumbling assault course wall at the bottom of the escarpment, are now visible. Only one building remains, with its large rusting double doors, it is situated behind Vigo School and was one of the motor transport garages.

The only other reminders left today is in the name of one of the roads running through the village, Erskine Road, named after the Commanding Officer of the 148 Training Brigade from January 1943, and the Brigade HQ, Hamilton Lodge, on the Harvel Road.

1946 – to date
With the departure of the army in 1946 ‘squatters’ moved in. These were people who, for the most part, had lost everything they had during the blitz. Here they found ready-made accommodation in the form of Nissen huts and well-made roads and soon a lively and friendly community was formed.

The presence of some 1,000 people in the area prompted the Councils of Strood, Gravesend, West Malling, and Northfleet to improve conditions for the inhabitants. Roads were improved, WC’s were installed, together with partitioning in the huts to provide three rooms. All at a price, of course, the Council could now charge rent at the rate of 7s & 6p per week. It was now known as Vigo Village.

The old camp lecture hall, Erskine Hall (on what is now the School field), was still standing and served the community in a variety of forms, and at one point it was used as a storage facility for props from the London Palladium.

A bus service was started along with a shopping centre, known as Piccadilly Circus, which provided a butcher, a Co-Op, café, a bakery, and a drapery store.  There was a library, housed in Erskine Hall, a barber with a fully equipped salon, and Dr Jenman and Dr Haslar held a surgery in ‘Harley Street’ nearby.

The stables at the back of Hamilton Lodge were used as a Primary School from about 1948. Prior to this, the children attended Meopham and Culverstone Schools. A Scout Group, the 17th Gravesend, was also started, run by the Church Army.

In 1964, Kent County Council bought the whole site, selling 150 acres to Trosley Country Park (officially opened in 1976) and 65 acres to an investment company associated with Croudace Ltd., who purchased the land for £65,000. Outline planning permission had been granted in 1962 with an original proposal which was to include 680 dwellings and 44 blocks of flats, 75 ft tall, but these were rejected. Final permission, with a much more environmentally friendly proposal, was granted in 1964 and the building of Vigo Village was begun.

On October 15th 1965, the first resident moved into Timberbank, with an official opening at Easter in 1966 by ‘Katie’, the girl famously associated with Oxo advertisements on TV, and with refreshments provided by the Cricketers Pub in Meopham.  By 1966 a Residents Association had been formed and, in April 1968, the whole site was taken over by Strood District Council with a part in the Parish of Trottiscliffe, transferred to Meopham.  Eventually, Vigo Village would become part of the Borough of Gravesend (now Gravesham Borough Council).

At the Eastern end of the site, on what is now Highview, a caravan park had been created, but in 1969 a mobile home site was created in Southfield Shaw to house some of its inhabitants, thus enabling the completion of the development of Vigo.  The Primary school was opened in 1972 and the following year work started on the building of the Village Hall. There were serious delays with the project and the Village Hall did not actually open until 1980.

Note: Further information on the school and the village hall is included under the ‘Landmarks’ index page in the ‘Places’ section of this website.

In 1990 Vigo Village celebrated its silver jubilee and Spanish dignitaries from the village’s namesake attended the celebrations. John Prance recalls that the Chairman of the Vigo Village Trust at that time was Eric Beetham, an ex Royal Navy man and he invited the Mayor to open the anniversary fete on the green. As

Vigo Village is named after the Spanish port where in a sea battle in 1702, and the English fleet under Admiral George Rooke beat the Spanish, Eric decided that an appropriate gift would be a framed picture of the Battle of Vigo Bay – an amusing, if not very subtle, gift.

September 1995 saw the formation of the Vigo Singers, now a thirty-five voice successful and popular female choir.  In 1968 following informal discussions at the Vigo Inn, the idea of forming a rugby club was mooted and Vigo RFC was subsequently formed, initially playing on the field behind the Vigo inn.

Note: Information on Vigo RFC and the Vigo Singers is available under the ‘Groups’ section of the website.

An older history of Vigo Village, written by S R Beaumont, and published in the Vigo Journal in 1969, is available by selecting the following link.