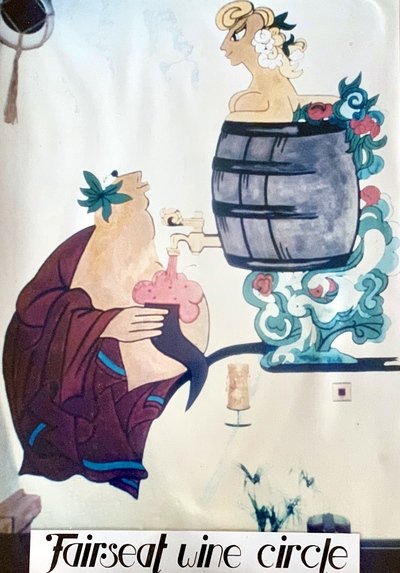 The following article on the history of the Fairseat Wine Circle was kindly provided by Arthur Allwright in October 2021.

How did it start?
Ann and I moved into the area in 1978 from Cheshire where we had been members of a Wine Circle making homemade wine. At the 1979 Horticultural Society AGM and Flower Show, the chairman, Jenneta Walton asked me to judge the wine class. I was surprised to find that the villagers did not make wine and the two bottles entered, (both in White’s lemonade bottles with screw caps – forbidden in those days), contained foul wine. Having given them a joint “first”, I decided to invite the members to form the Fairseat Wine Circle. The first meeting in 1980 was attended by 30 locals, a number that has been maintained ever since.

The Early Days
We were entertained at our monthly meetings by speakers from other wine circles, covering subjects about the types of fruit and vegetables to be used, alternative methods of fermentation, bottles, corks, alcoholic testing and rules about presentation for shows. The enthusiasm was amazing and after a few years, we enjoyed our best show with 110 bottles of wine and beer on display. Annual programmes included a summer BBQ, a garden party, supper evenings and day trips and short breaks to French and German vineyards.

Recent Times
Homemade winemaking was a time-consuming hobby and the advent of the Booze Cruise in the 90s was a welcome release. Cars returning from France were filled with cheap commercial wine and £1 Channel crossings became the attraction. The November Beaujolais Nouveau evenings became a regular on our programme with members having rushed to France during the day and returning with the awful young wine for a fun evening.
Those days passed and the Wine Circle gradually changed into its current format in 2021 of a social club but retaining interest in wine. Our programme still includes speakers, quizzes, supper evenings, the BBQ and garden party, a Kulcher evening, treasure hunts around local villages and, of course, wine tasting.