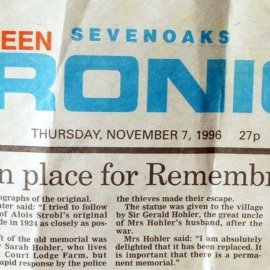 The statue was stolen for a second time on the night of the 6th October 1995. Once again thieves used ropes and a lorry to haul the bronze figure from its plinth and drag it unceremoniously along Malthouse Road. This time, there was to be no recovery of the statue.

Valiant efforts were made by the Parish Council to track down any remaining relevant material by Strobl in his Budapest studio. Frustrated in these attempts, the Council searched for a sculptor capable of creating a new Palm Bearer statue for the memorial. The foresight of an earlier Council Chairman, Ernest Unwin, had provided adequate insurance cover for this very eventuality.

After widespread consultation, the Parish Council agreed that a replacement statue in the style of the original should be obtained. After receiving a number of quotations and consulting a number of sculptors it was decided that the commission should be awarded to Faith Winter FRBS who had carried out a number of famous works, including the statues of Lord Tedder and Air Marshal Harris in London.

The replacement statue was cast at the Burleighfield Arts Foundry, High Wycombe, and erected in Stansted on Tuesday 5th November 1996. It was dedicated by the Rt Rev. Brian A Smith, Bishop of Tonbridge, together with the Stansted Rector, Chris Noble, on Sunday 10 November 1996. The ceremony was followed by lunch in the barn at Court Lodge, Stansted.

The cost of the new statue, including casting, was £14,900 (ex. VAT). The total cost of replacing and re-erecting the statue amounted to £17,557.79 (ex. VAT) of which £15,350 was recovered from the insurance, and £1,000 from Tonbridge and Malling BC. Stansted Parish Council made up the difference from its reserves.

Along with St Mary’s Church, the War Memorial continues to provide a parish focal point for the three villages of Stansted, Fairseat and Vigo and is used as a centrepiece for Remembrance Day celebrations to the present day.