This article provides details of the Hurricane crash in 1940 and the subsequent excavation of the aircraft together with the recovery of Colin Francis’ remains.  A synopsis with details of Colin Francis’ short life and the subsequent military funeral is available from the ‘Casualties’ page under the ‘People’ section of the website.
An additional website page, covering more recent memorials and anniversaries, is available via the following link which may also be accessed from the ‘Events’ index page.
Pilot Officer Colin Francis – Recent Commemorations.

The photograph shows a Hawker Hurricane similar to the one flown by Pilot Officer Colin Francis which crashed on Friday 30th August 1940 at Coldharbour, Stansted, Kent.

The Hurricane LF363 in the photograph is painted to represent the 249 Squadron Battle of Britain Hurricane with ‘GN-F’ on its port side. ‘GN-F’ was the aircraft flown during the Battle of Britain by fighter ace Wing Commander Tom Neil DFC and Bar AFC AE LdH.

The story of the crashed Hurricane at Coldharbour is a poignant one if, for no other reason, it underlines the harsh reality of those times and how the events of that day continued to impact on the survivors and relatives for many years thereafter.

The period leading up to the crash had seen an escalating number of German aircraft attacking RAF airfields, radar stations, docks, ports and coastal shipping. Stansted was on the flight path to and from the London docks, and its proximity to the airfields at Gravesend, Detling, West Malling and Biggin Hill, all of which had been heavily bombed, meant that the sight of vapour trails overhead, and the sound of machine-gun fire would have been commonplace. The crash also highlights how the sky above Stansted featured in some of the fiercest days’ air fighting of the Battle of Britain.

Colin Dunstone Francis, of Stoke d’Abernon, Surrey, was posted to 253 Squadron at Kirton-in-Lindsey and after a spell in Scotland, the squadron moved to Kenley on August 29th 1940. This was the epicentre of the daily air combats between hundreds of aircraft that were taking place over the south-east of England. It should be noted that this was at the height of the Battle of Britain, which started in July 1940.

On the morning of the 30th August 1940, Francis took off in a section of three aircraft to join the rest of the squadron in an attacking a force of bombers, which was escorted by some thirty fighters. It was his first encounter with the Luftwaffe. The Squadron’s Operational Record Book times the crash at 11:15, so it seems likely that he was shot down whilst returning to Kenley. The leader of his group of three fighter aircraft was the co-commanding officer, Squadron Leader Tom Gleave.  Gleave recalls being detached from the rest of the Squadron and seeing a formation of Me109’s in the haze about 500 feet above them. Unhesitating, he led the group of three fighter aircraft right through the enemy planes, firing as he went. The third aircraft in Gleave’s group, flown by F/Lt Brown, received hits and disappeared.

Gleave and Francis then turned to engage the aircraft attempting to regain formation when another enemy aircraft came into Gleave’s sights. Gleave turned with him, firing bullets that brought black smoke from the wings before the Me109 dropped vertically, still smoking.  A fourth Messerschmitt passed slightly above Gleave, and he turned and climbed to fire into the underside of its fuselage. But after two or three seconds’ firing Gleave heard the ominous clicking that told him he had used up all his bullets. But already the fourth victim was mortally hit and rolled on its back before falling away. (‘Fighter: The True Story of the Battle of Britain by Len Deighton 1979 ISBN-10: 1845951069)

Of Colin Francis, there was no sign. Gleave recalled “after Brown was shot down, Colin and I went in by ourselves. We went right into the middle of them and I never saw him again. He was a damned fine kid and full of guts.” (‘I had a row with a German’ by Tom Gleave. Macmillan & Co. Ltd; 1st edition 1 Jan. 1941)

Overall, that day, the RAF shot down forty enemy aircraft for the loss of twenty-four of their own, with nine pilots killed, three of whom were from 253 Squadron, one of whom was Colin Francis, who died in his aircraft in the field at Stansted. The very next day, Stansted was again in the thick of it when a Messerschmitt 110 belly-landed at Court Lodge with its gunner mortally wounded and two Messerschmitt 109’s crashed nearby, one in West Kingsdown and one in Knatts Valley.

Colin Francis was one of over 20,00 airmen posted as ‘missing believed killed’ with no known grave in WW2. The truth was that he lay buried with his aircraft within the parish boundary for over 40 years, out of sight, but doubtless never out of mind to those who remembered him. It was only when the burgeoning interest in aviation archaeology gained traction in the 1970’s/1980’s that his aircraft was excavated in 1981 with the body of PO Colin Francis still strapped into the cockpit.

PILOT WAS SHOT DOWN IN WARTIME DOG FIGHT –The local newspaper, The Sevenoaks Chronicle, published the following article on Saturday, 5 September 1981 concerning the discovery and excavation of the crashed Hurricane and the body of the pilot, Colin Francis.

A young wartime fighter pilot, whose remains were uncovered in the wreckage of his Hurricane plane, has this week been identified. The remains of 19-year-old Colin Francis were discovered in a field at Stansted, near Wrotham. Nearby was the back of a watch with “Colin” inscribed on it. An inquest will be held by the West Kent Coroner, Mr Frank Warriner, next week.

The pilot and Hurricane were found last Wednesday afternoon by enthusiasts from the Tonbridge Aircraft Preservation Society who were investigating reports of a Battle of Britain plane shot down near the village in August 1940.

Pilot Officer Francis was attached to 253 Squadron at RAF Kenley. He was shot down over Stansted in a dog-fight with a mass of German Messerschmitt 109s at 11.15 am on August 30. It was then believed that the plane crashed near Biddenden, Kent. He was flying Hurricane L1965 – a number which helped identify the wreckage. A Ministry of Defence spokesman said that 253 Squadron had lost a number of aircraft on that day. The excavation was supervised by RAF and Ministry of Defence personnel and now the MOD is searching for any surviving relatives.

When members of the preservation society started their excavation they believed that they were looking for a Spitfire – but found the Hurricane instead. It is thought that the plane was nearly vertical when it crashed as it was smashed into smithereens. It is also believed that this was Pilot Officer Francis’ first dog-fight. The land the remains were discovered in – a cornfield off Wrotham Hill Road – is owned by local county councillor Tony Hart who gave the society full cooperation.

The discovery also ended a 41-year-long search for Colin Francis by retired Group Captain Tom Gleave. He was Colin’s squadron leader and was flying alongside when he was shot down. He told the Chronicle on Wednesday: “I was flying with someone on my right and Colin on my left when we met a mass of Germans in a formation called a balbo. The person on my right was shot down before we actually reached them. Then I saw Colin going into the fighters and that was the last I saw of him.”

Group Capt Gleave crashed near Shoreham the next day. He is head of the Guinea Pig Charity set up during the war for severely burnt pilots who had to have plastic surgery. He added: “There are strong arguments on both sides about whether pilots should be dug up and buried with full military honours or left and I don’t know what the answer is. As far as this one was concerned I am told the discovery of the pilot was accidental.”

The dig was led by Mr Steve Vizard of Lower Judds Farm, Tonbridge – leader of the Preservation Society. For several days the dig and discovery were kept secret until the official machinery was ready to control recovery of the body. It was Mr Vizard who uncovered the controversial crashed Hurricane site at Chart Sutton last year. 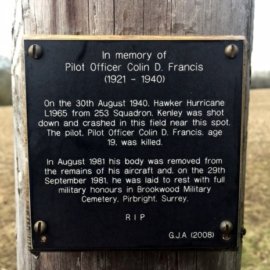 Pilot Officer Colin D Francis was finally laid to rest at the War Graves Cemetery in Brookwood near Woking where the RAF provided a full military ceremony in his honour.

His coffin was attended by members of the Queen’s Colour Squadron from RAF Uxbridge and the ceremony was conducted by an RAF chaplain. Three volleys were fired over the grave which is in a plot reserved for RAF officers.

Although Colin Francis is not recorded on Stansted War Memorial, Geoff Allgood, a local resident, felt his sacrifice should not be forgotten by the Parish and erected a plaque in his memory close to the crash site on the footpath that leads from Wrotham Hill Road to Coldharbour and each year he places a poppy cross to the memory of Pilot Officer Colin Francis.

Note: Further details on Colin Francis, together with a news video of the military funeral, are available via the ‘Casualties’ page of the website which is part of the ‘People’ section.

The video below was broadcast by Thames News on the 29th September 1981.
The RAF provides full military honours in a ceremony for pilot officer Colin Francis forty-one years after being shot down by Messerschmidt in the skies above Kent.   Nineteen years of age his aircraft lay hidden until found by an amateur aircraft preservation society in Stansted, Kent.   The broadcast includes an interview with family aunt Evelyn Haywood.