This section contains information and photographs of local infrastructure including services, communication, and transport. 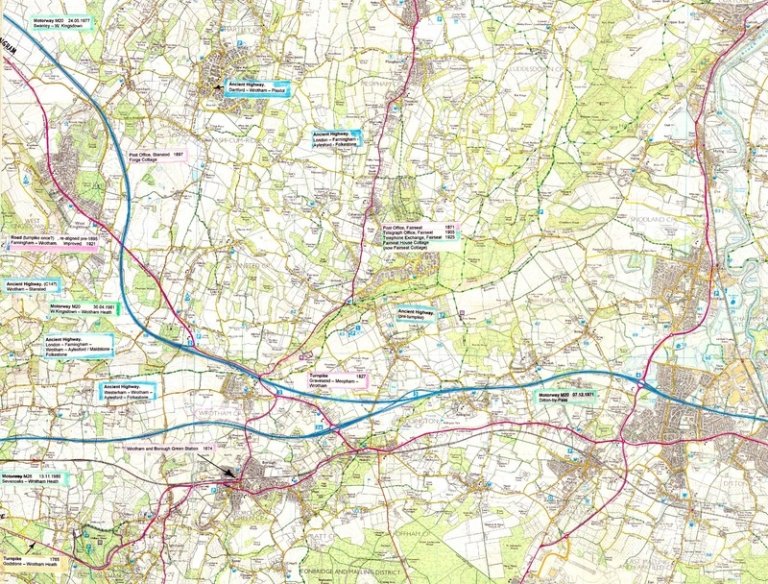 Note: Click on the map for a full-size version

Until the 1820s the road from Gravesend finished at the top of Vigo Hill. In 1825 a law was passed allowing the building of toll roads and shortly after the section of road from the Fairseat – Trottiscliffe junction to Wrotham was built as a toll road with an accompanying tollgate – ‘The Vigo Turnpike’.  The tollhouse and tollgate were opposite the Vigo Inn, on the site now occupied by Wykendene.
Note: An article on the history of the toll road is available via the Places\Landmarks page.  Vigo Turnpike

At this time most roads were not surfaced and were, in essence, wide earthen tracks with stone (flint/chalk) surfaces in places. The 1841 Tithe-Rent map shows the road/track network in Stansted and Fairseat and it is almost identical to the current day road network. The main differences are that Wises Lane (Stansted) and Hognore Lane (Fairseat) are both shown as main thoroughfares whereas today they are byways or tracks.

In the early 1970s, various routes were being considered for the motorway network between Dartford and Sevenoaks and one of the three options being considered ran through Stansted. The original Stansted & Fairseat Society was also instrumental in persuading the Department of Transport to opt for a longer route for the M20 which avoided the Parish altogether.

Note: Further information on local Post Offices is available in the ‘Places>Landmarks’ section.

It was around 1910 that the telephone service first came to the villages. The date is not certain but photographs of this vintage have telegraph poles in them including one with WW1 cavalry passing the Horse and Groom public house with a telephone pole and wires prominent in the image.

The Telecommunications Tower in Crabtree Close, Fairseat, Kent, has played a vital part of the television, radio and telephone infrastructure for the south-east since 1966. The building was initiated by Post Office Telephones as part of a series of microwave links from the London Post Office Tower. The main route was from London Tower, with repeaters at Fairseat and Flimwell, to Tolsford Hill near Folkestone. The system provided telephone circuits and television links to Europe. From 2000 onward the analogue network was turned off and the tower is now used mainly for mobile services and low capacity line of site links.

The local telephone exchange is situated next to the Telecommunications Tower but is a separate entity. It was built in about 1967/8 and replaced the previous manual system which was operated by Postmistress Stella Hendren at The Old Post House, Vigo Road.

Note: Further information on the Telecommunications Tower is available in the ‘Places>Landmarks’ section.

One of the most basic needs of a community is a water supply and in 1905 the Mid Kent Water Company constructed a mains water supply to both Stansted and Fairseat. Previously, water was obtained by collecting rainwater in underground tanks or from wells and ponds and water for drinking had to be boiled before use. Even after the introduction of piped water, Parish Council records show concern at the level of water charges and complaints about discoloured water.

In long hot summers prior to 1905, there would be queues of farm carts with barrels waiting on the London Road to get water from near the Spring Tavern at Nepicar, to take back to Stansted for their families and livestock.

The building of New Ash Green in the 1960s/70s put great strain on existing infrastructure, particularly the water supply and, in order to improve water pressure, a million-gallon above-ground tank/reservoir was built at the top of Stansted Hill.

In 1939, the last year before World War II, mains electricity was provided to Fairseat by the Kent Electric Power Company. The work in Stansted followed the War and was completed in 1948/9. Prior to this lighting was by oil lamp and heating was largely by coal. Radios were powered by ‘Dry’ batteries which had to be replaced each week. Only the larger houses had generators and even then they were usually only turned on when electricity was required.

Between 1969 and 1970 Malling RDC provided mains sewerage to Fairseat. This was extended, in part, to Stansted in 1976 and full services were provided in 1981. By the later dates, Malling RDC had been replaced by Tonbridge and Malling District Council.

Because the area is hilly the engineers could not rely on gravity alone to dispose of the waste and consequently, collection and pumping stations were installed. The largest of these are next to Stansted Village Hall and another further north along Malthouse Road. Prior to this, most houses had either a soakaway, a cesspit or a septic tank in their gardens and many examples of these remain.