Public footpaths are rights of way originally created by people walking across the land to work, market, the next village, church, and school. This includes ‘Mass paths’ and ‘Corpse roads’. Some footpaths were also created by those undertaking a pilgrimage. An example of the latter is the Pilgrim’s Way. Some landowners allow access over their land without dedicating a right of way. These permissive paths are often indistinguishable from normal paths, but they are usually subject to restrictions. Such paths are often closed at least once a year so that a permanent right of way cannot be established in law.

A byway is a track, often rural, which is too minor to be called a road.  These routes are often unsurfaced, typically having the appearance of ‘green lanes’. Despite this, it is legal (but may not be physically possible) to drive any type of vehicle along certain byways, the same as any ordinary tarmac road. In 2000 the legal term ‘restricted byway‘ was introduced to cover rights of way along which it is legal to travel by any mode (including on foot, bicycle, horse-drawn carriage etc.) but excluding ‘mechanically propelled vehicles’. A byway open to all traffic (BOAT) is a highway over which the public have a right of way for vehicular and all other kinds of traffic but which is used by the public mainly for the purposes for which footpaths and bridleways are used (i.e. walking, cycling or horse riding.

A bridleway is a way over which the public has a right of way on foot and a right of way on horseback or leading a horse, with or without a right to drive animals along the way. Although Section 30 of the Countryside Act 1968 permits the riding of bicycles on public bridleways, the act says that it “shall not create any obligation to facilitate the use of the bridleway by cyclists”. Thus the right to cycle exists even though it may be difficult to exercise on occasion, especially in winter. Cyclists using a bridleway are obliged to give way to other users on foot or horseback pursuant to the Countryside Act 1968.

The following map is courtesy of Kent County Council and highlights footpaths, byways, and bridleways, according to the following key:
Footpath    Restricted Byway    Byway (BOAT)    Bridleway 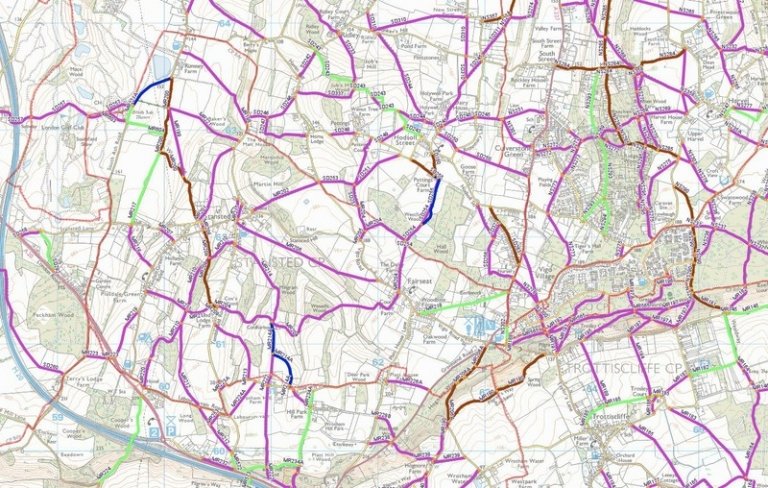 Please click on the map image above for a full-size version.

Presented below is a list of the local footpaths, byways, and bridle paths, in the parishes of Stansted and Vigo, Kent.  For footpaths that cross parish boundaries and continue with different references, then these have been included.  This is particularly relevant for some of the historical footpaths south of Vigo Village and in Trosley Country Park. The path references are as defined by Kent County Council.  Detailed information on an individual path, including photographs, location map, and route guidance, is available by selecting the relevant footpath reference link.

A Bridleway starting from Vigo Hill and continuing as bridleway NS302 to Harvel Road.

Footpath MR198 runs from just north of The Old Malthouse, Malthouse Road, to Rumney Farm on the South Ash Road.

Footpath MR199 branches off Wises Lane (MR200) near Stansted Golf Course and rejoins Wises Lane at MR221 to the west of Bakers Wood.

Restricted byway MR200 is known as Wises Lane and was originally part of the main thoroughfare from Dartford to Wrotham. MR200 runs from Oaktree Farm, Hatham Green Lane, to Rumney Farm on the South Ash Road.

Footpath MR202 runs from the War Memorial at the bottom of Stansted Hill, to the boundary of Stansted and Ash-cum-Ridley parishes, midway down Fairseat Lane.

A long footpath starting opposite Stansted Lodge Farm, Tumblefield Road, passing through Coldharbour and Fairseat finishing at the parish boundary in Southern Shaw, near Fairseat Lane.

A short footpath running from Turkins Corner (the junction of Fairseat Lane and Stansted Hill) to join footpath MR204 near Westfield Wood.

An unrestricted byway starting on the Gravesend Road near the top of Vigo Hill, and finishing to the south at the Pilgrims Way (MR190).

A footpath starting near Tumblefield Estate, Tumblefield Road, and on to Coldharbour where it meets MR204 and continues as MR214A.

Footpath MR215 starts in Plaxdale Green Road, opposite St Marys Church, and runs across the recreation ground by Stansted school and to Malthouse Road.

A bridleway running from Vigo Road, near Woodbine Farm, to Gravesend Road, near the telephone exchange.

A bridleway starting in Hatham Green Lane, opposite Parsonage Farm, and running Northwards where it joins byway MR200.

A short footpath linking the end of MR210 in Thriftwood Camp Site and Labour in Vain Road near the Hilltop Hotel.

MR221 is an uphill footpath that runs from the pumping station in Malthouse Road, through woods and fields to join MR200, Wises Lane, at a T junction.

A restricted byway that replaced the western part of MR221 in the early 2000s. The byway runs parallel with Ash Lane from the northern end of Wises Lane (MR200) to South Ash Manor.

A footpath branching off MR214A south of Coldharbour and finishing on Wrotham Hill Road, near to Grove Cottage.

Footpath MR223 runs from the A20, near Bowyers Cottages, and onwards, crossing the Parish boundary, to Terry’s Lodge Road.

This path runs from South Ash Manor for 203m until crossing the parish boundary and continuing as SD257 to West Kingsdown.

A short path running from Ash Lane, opposite MR604, to South Ash Manor where it joins SD257 towards West Kingsdown.

A bridleway that runs to South Ash Manor from the mid point of Wises Lane (MR200).